Two weeks ago we were asked to pick a challenge and try to do it on both Etoys and Scratch. TinyTeddies and I have teamed up and chose to do the dialog challenge, we had to make two things have a conversation with each other.
TinyTeddies finished the Scratch version when I teamed up with him as I had been away absent the lesson before hand. We then tackled the Etoys Version, this was very difficult from the get go. 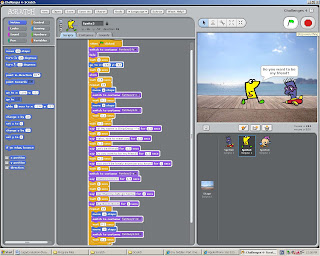 We First started out by creating a background then some characters. We used several scripts to get the characters moving. We also had to make a clock so that the characters would move and stop on time. It was pretty simple to make it start and stop on time as we had done a similar thing in the past.
We then started to put text to make the characters talk to each other. This was by far the hardest thing we have done in trying to get them to talk in time and to make it appear and reappear. Luckily for our team TinyTeddies was very patient and very skilled and got it to work.
We sloved this problem by using the timer from the clock and using a lot of Test functions thanks to Mr Kerr's findings.
This had got to be the most time either of us had spent on one activity. Here is screen shot of the Final Product of our Etoys Activity. 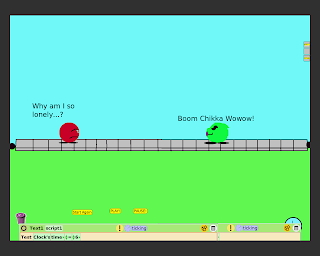